Glutathione (GSH) an intracellular tripeptide consisting of glycin, cystein and glutamic acid. It is common in all tissues and protects the cells against oxidative stress. It is important for the activation or inhibition of enzymes and transport proteins. The transport of amino acids is also controlled by glutathione. Glutathione is very important for the stabilization of protein- and non protein sulfhydryl-groups to maintain a reducing intracellular environment.

Most of the intracellular glutathione is reduced (approx. 90 % in EDTA-blood), only 10 % is oxidized (GSSG). The NADPH-dependent glutathione reductase is maintaining this steady state.

Alterations in the glutathione status are involved in the pathogenesis of several diseases. In discussion are reperfusion damage, liver injury, cancer, diabetes mellitus, cataract, inflammatory diseases, chronic lymphatic oedema and radiation damages. Altered glutathione concentrations might also be due to pollution, cigarette smoke, side effects of drugs and aging.

In case of oxidative stress the amount of reduced glutathione is diminished. The relation of reduced to oxidized glutathione gives information about the redox and detoxification status of cells and tissue. 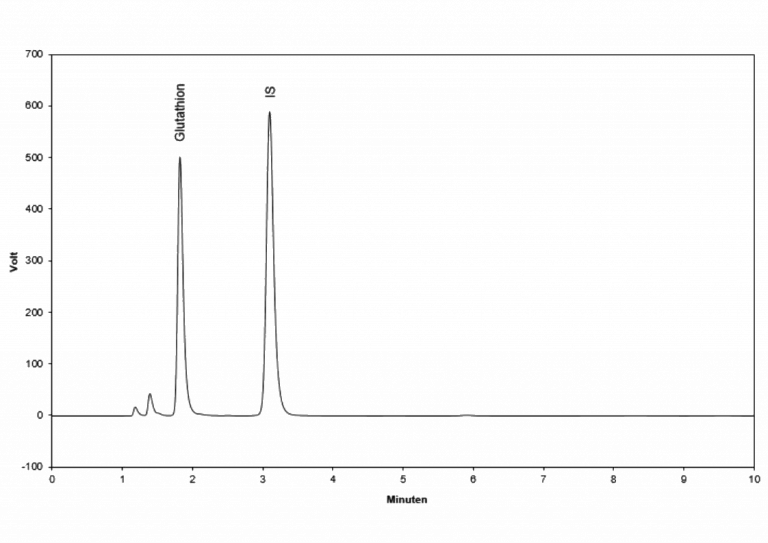 Principle of the method

For the determination of glutathione the sample is divided in two aliquotes. One is reduced and the total amount of glutathione is measured. The other aliquot is treated without reduction solution, which determines only the reduced glutathione. During the derivatisation reaction glutathione is converted into a fluorescent probe. The following precipitation step removes high molecular substances. After centrifugation the fluorescent probe is cooled (2-8°C) and injected into the HPLC system. The isocratic separation via HPLC at 30°C using a reversed phase column in two runs. One run lasts 4 minutes. The chromatograms are recorded by a fluorescence detector. The quantification is performed with the delivered EDTA-blood calibrator; the concentration is calculated by the internal standard method. The amount of oxidized glutathione is calculated by substraction of Glutathionetotal minus Glutathionereduced.